At the start of 2015 I stumbled across the concept of a digital nomad, the idea being that if you have an internet connection you can work from anywhere. The mixing of travel and work made a lot of sense to me, as it allowed me to keep doing what I love (developing web apps) with a dash of adventure. 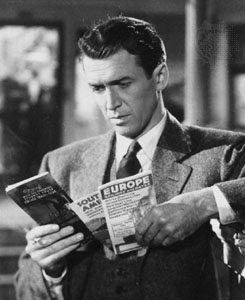 Before I packed my bags & said farewell forever to everyone I knew, I lurked online, reading up on the best places to go and what I’d need. I started with #nomads, a slack community of other digital nomads. Then I followed other nomads on Twitter like James Seymour-Lock and Pieter Levels. Lastly found a bunch of Facebook groups, these were all great sources of information.

One of the big take always I learnt from current nomads is to not just get up and leave without anything to come back to. Instead I should start with small trips and find out the way I like to remote work. Everyone seems to have a different approach and remote working does not have a “one size fits all” solution.

Finally I attended a bunch of meetups in London, to find out what Digital Nomad folks are actually like. Truth be told, it’s one of the friendliest meetup groups I’ve ever attended. It had a very “first week at university” feeling where everyone just wants to be helpful to each other.

My bag was packed and I had a MacBook Pro under my arm, I was set to go. In my mind I was venturing into the unknown on a amazing new adventure. In reality I was just going to other city (A 1 hour flight away, still within the EU) for two and a bit weeks with a lovely AirBnB booked. I think starting off almost as a holiday where I worked for a few days during the week was a really nice way to ease into working remotely. 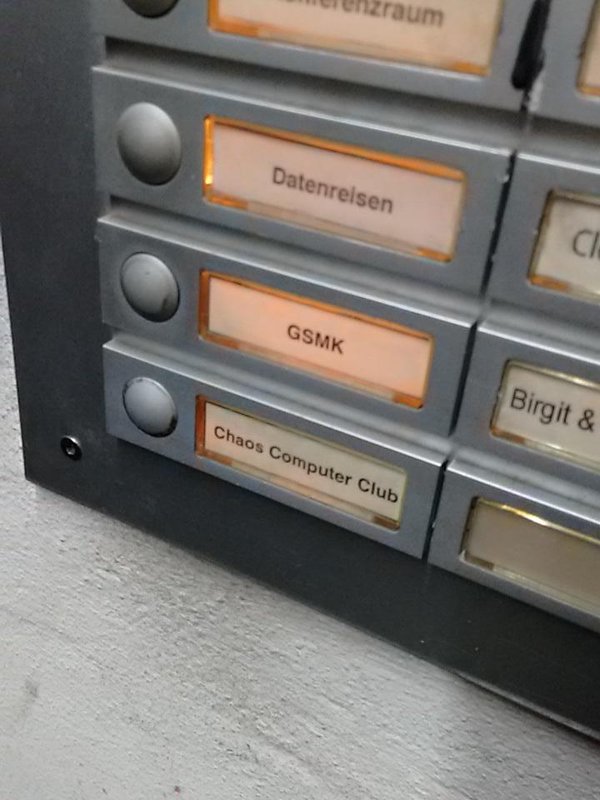 I had visited Berlin before while Interrailing in 2013, I remembered leaving the city feeling like I had only scratched the surface of what it had to offer. I was totally right!

Working from Berlin (Instead of solely doing touristy stuff) offered a totally different perspective of the city. I was able to work and talk to local Berliners, which made exploring Berlin that bit more fun as they recommended things I’d never even thought of looking for, such as the Chaos Computing Club.

I stayed in Kreuzberg (Near Kottbusser Tor), which was near the co-working space co.up. I really liked co.up because they hosted a bunch of events during the week in their office (Such as Berlin.JS & CodingAmigos). Having something to go to in the evening really helped when I was initially feeling on my own in a new city. 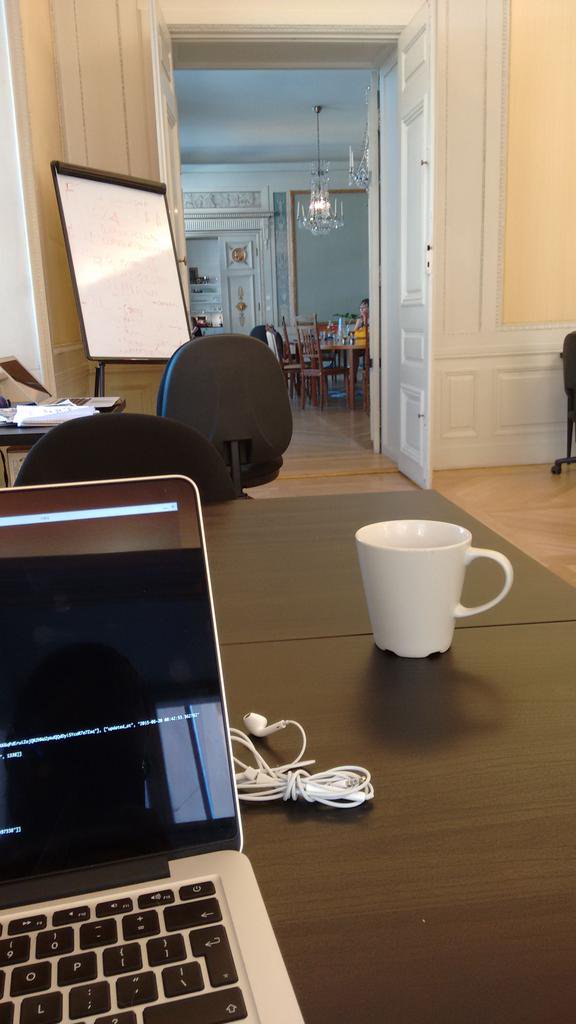 I didn’t know what to expect from Stockholm. I was told before leaving that Stockholm was an dull, unfriendly & expensive city. I think these were just a stereotype spread by people who don’t want Stockholm to become overcrowded.

Stockholm had a lot of interesting things to see and do (Like the Vasa & Abba The Museum), but as a city they’ve also embraced Meetup. Most days I’d be able to find something different to do and as a result I met a bunch of really interesting people.

I settled into the co-working spaces in Stockholm really quickly. One of the main contributors to this was the concept of “Fika”, a Swedish cultural quirk, where you sit down and have cinnamon buns with coffee while talking to each other. This helped break the ice & made for a really warm & welcoming atmosphere where ever I went.

Stockholm (like most of the nordic countries) is a tad on the expensive side, however generally the quality of everything is much higher. In my eyes paying the little bit extra was always a reasonable trade off.

My two favourite co-working spaces were, The Castle (Where the photo above was taken) & Guerilla Office (A popup co-working group who meet in cafes).

Prague is the perfect city for remote working in my opinion, it has a low cost of living and offers a very good quality of life for what you’re paying. Also the metro system makes travel around the city super easy.

I didn’t manage to try all the co-working spaces in Prague (There are far too many to choose from), I did manage to try a few though. My favourite (That also happened to be a 5 minute walk from my accommodation) was Locus Workspace. It was a nice mix of members, and the staff organised lots of small events such as after work talks, shared biscuit & coffee breaks etc.

Prague was also full of surprises, one of my favourites was when a really loud announcement in Czech came from outside, and was then followed by a really loud Siren. Everyone in the office just ignored it and kept working and I was quietly wondering if this would be my last commit before I start playing fallout in real life. Turns out there is a Siren Test the first Wednesday of every month.

Wifi was available in most locations in Prague. I was really pleasantly surprised to find the Laundromat I was doing my washing in had 50mb/s internet.

Unfortunately Meetup isn’t very popular in Prague, but I attended a few really well organised CouchSurfing events which turned out to be a really fun way of meeting a different mix of people. 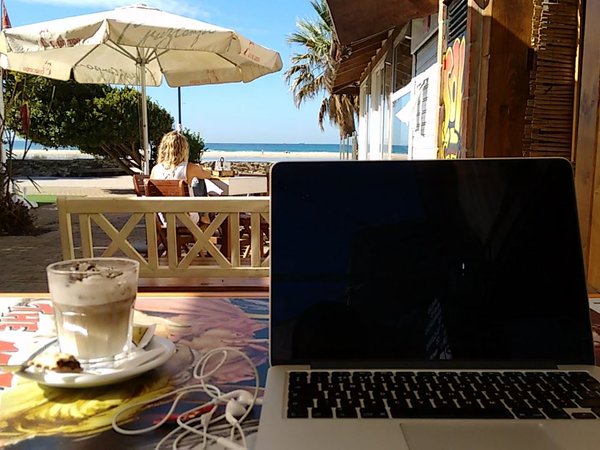 Tarifa is a small town at the southern tip of Spain, it’s mostly known as one of the most popular kite surfing locations in the world. This was my first time working outside of a big city, so it was a fairly special experience. Being able to work from a Cafe with an amazing beach view, and then the next day learning how to Kite Surf as a very unforgettable experience (and I made sure to let friends stuck in an office know about it).

One of the cool experiences in Tarifa was working from a co-working hostel, I was staying in an AirBnB at the time but it was a really friendly environment. Going forward I’m definitely going to try and make more use of co-working hostel spaces!

I was also quite lucky in my timing when visiting Tarifa because I got there just before the Nomad Cruise was departing from the area. As a result I met a bunch of other remote workers, who really opened my eyes to how I could get more out of traveling while working. 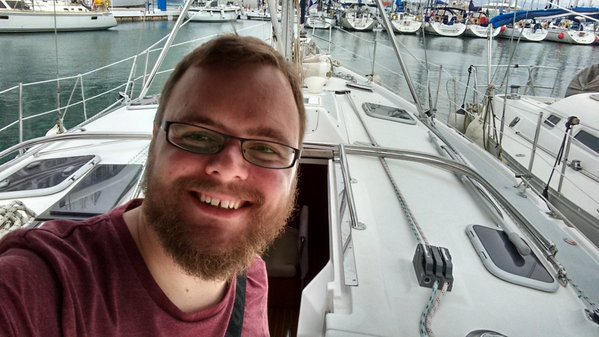 I was only in Gibraltar for a few days but it was such a weird, but worth visiting place, especially if you’re a British. It’s best described as a small exaggerated version of the UK, with monkeys. I was only staying for a few days, but the history and setup of the country was enough to keep me interested.

Most of the main city is covered in a big 100mb/s WiFi zone that costs about £2 per day (or £10 per week) to access. I’m a pretty introverted person who hates having to ask for the WiFi password at Cafes, so having a city wide WiFi zone was amazing.

I got really lucky with my accommodation, as I was staying in the marina on a 50ft Yacht! This was my first time staying on a yacht and it was by far one of my favourite AirBnB experiences.

Everywhere I went I really enjoyed meeting other people, one of my fondest memories was attending my first hack night (where everyone can show off and get help with their current projects). I’d definitely want to keep that up.

Flights are currently super cheap, so it makes sense to keep traveling while I can. That being said, I’d love to settle down in a city for a few months and put down a few roots.

Where ever I go, I don’t want to buy a return ticket. One of the main lessons I’ve learned in the last 6 months is having a fixed return date stops me wanting to say “That other city sounds more fun, I’ll go there” or “This place is awesome, I should stay a little longer”.